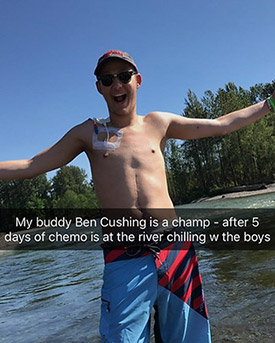 Ben was born and raised in Sammamish, WA, where he attended Eastlake high school. Although Ben played soccer for the first couple years, his real skill was with people. Whether they were peers or teachers, Ben’s cheerful attitude and affinity for jokes led to meaningful relationships with those he spent time with. So, when it was time to go to college, Ben decided to attend Washington State University, where he quickly found a second family with the TKE fraternity. Ben was thriving in his first semester of college, but the fun was short lived.

Before the second semester began, he was diagnosed with Hepatosplenic T-Cell Lymphoma, a rare form of cancer. Throughout his treatment, Ben remained an inspiration, one who was more concerned with how his friends would take the news of his diagnosis than the diagnosis itself. Ben fought bravely for 9 months, remaining positive until the very end. In October of 2017, Ben passed away, but not before telling his family, friends, and doctor to continue the fight for him after he was gone. Ben had an unencumbered love for life and his selflessness and care for others will always be remembered by those who were lucky enough to call him a friend.

A Message From Our Founder At The Time Diagnosis - 2017

Hi, my name is Ben Cushing. I grew up in Sammamish and am a 2016 graduate of Eastlake High School. I had just completed my first semester at Washington State University (Go Cougs!) when I was diagnosed with cancer.

After a month of feeling lousy and experiencing tremendous abdominal pain, I was admitted to the hospital. After a few weeks in three different hospitals across Washington, I was diagnosed on January 19th, 2017 with a rare form of cancer called Hepatosplenic T-cell Lymphoma. I’ve completed 10 rounds of different, heavy duty chemo with the hope of getting to remission. When that happens, I’ll need to have a double umbilical cord blood transplant which is very much like a bone marrow transplant. With transplant, I will be in the hospital for 2-months.

This has been a very difficult journey for me and my family, but we are fortunate to have amazing love and support from our village of friends and family, fraternity brothers, and extended community. I am very grateful for the outreach and continue to fight hard every day.

Mine is such a rare and aggressive form of cancer that only 50 people nationwide have been diagnosed and the only way we can truly beat it is through research. We are lucky here in the Seattle area to have a fabulous doctor at the UW/Seattle Cancer Care Alliance who treats this type of lymphoma and is in charge of my treatment plan. Dr. Shustov and team are pursuing new hypotheses and treatments for T-cell lymphoma.

By donating to my CushItToTheLimit research fund, you can help accelerate the treatment and ultimate cure for this aggressive disease.